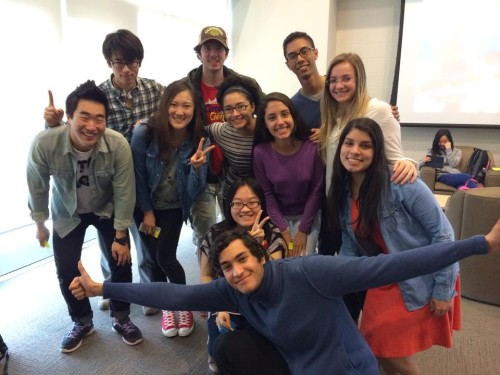 On my way out of the library, weighed down with books and looking like your everyday stressed-out student, I think I got captured in about a dozen tourist photographs. It’s one of the consequences of attending the oldest English university in the world. So, what is Oxford like?

Oxford, known as “the city of dreaming spires,” has been my home for five months now. The lack of language barriers means that England is an easy country to travel to for studies, but Oxford has quite a few differences from your typical Canadian university. I began here in October, which is the first of three terms (called Michaelmas, Hilary, and Trinity), all of which are only eight weeks long. Such a short term sounds nice in theory, but when you see the amount of work they expect you to complete in that time you might wonder why anyone willingly comes here to study. However, students have coveted a place at one of Oxford’s colleges for hundreds of years, and will likely continue to do so for a long time to come.

The college system is quite different from anything in Canada. Undergraduates are enrolled in a college more than a program, and they take all of their courses (‘tutorials’) in their college rather than in a central faculty building, where the larger lectures are held. The college is also where many students live, eat, and socialize. The colleges vary in size, specializations, and scholarships, so it is important to research which college is the best fit for you (though competition for the more well-funded colleges is generally quite tough). At least three colleges claim to be Oxford’s oldest—it’s all a question of who it is you’re asking. It’s when you’re inside one of the old colleges and you see the groomed green lawns and the familiar golden limestone that the reality of studying here sinks in.

Arriving in Oxford for the first time meant seeing a place that had only existed in theory to me for such a long time, and even now I consider this city somewhat imaginary because of how its reputation precedes it. Lots of aspects seem entirely unreal: there’s All Souls’ College which has no students and is famous for its one-word entrance exams, or Merton College where students meet at night when the clocks are “put back” from Daylight Savings to drink a lot of port and walk backwards for one hour to make up for the time that goes missing (and so keep the universe in balance, theoretically). It’s called the ‘Time Ceremony.’ I can’t make this stuff up.

I’ve had many amazing experiences here as an academic, but also as an international visitor. I dined in a hall at Christ Church College, which was used as the film set for the Great Hall in the Harry Potter films (I did wear a robe, as required for formal dinner, but I didn’t see the portraits moving). I drank wine in Oscar Wilde’s Oxford bedroom and drank beer in the pub where J.R.R. Tolkien and C.S. Lewis met with the “Inklings” to read over their work. Oxford is a place where tradition reigns strong, and wherever you go you’re aware of how brief your own time here is in comparison to all the history stretching out before.